We recently received a "Thank You" letter regarding a donation toward conservation that our THCC chapter made several years ago. We thought you'd like to see it, as it is your generous donations that have made this possible!

Dear THCC Board of Directors,

The paper about home range sizes of the West Texas dama gazelles has been accepted for publication. This is the conservation project you got funded. The link below should give you a look at what the journal African Zoology is planning to print. (Please click on link below.)
https://www.tandfonline.com/eprint/9WZ7G5ZKMJINBZBJNBU7/full?target=10.1080/15627020.2021.1908845
You were terrific in working with chapters of Safari Club International to make this conservation project happen. I have also forwarded this link to various of the people who are trying to help dama gazelles stay alive in the wild. This Texas information should help.
So many thanks to you and to everyone in the Texas Hill Country Chapter and Austin Chapter of SCI. If you can pass along word to them about the continued results from the conservation project they did so much to get going, I hope all their members will be very pleased.

THCC's recent donation to the Borderlands Research Institute is assisting them with the restoration of the declining pronghorn population in the Trans-Pecos region of Texas.  Populations in this area have been in steady decline since the 1980's.  Following an 8-month drought in the Trans-Pecos during 2008, the Texas Parks and Wildlife Department (TPWD) documented 2,000-3,000 adult pronghorn perishing in one of the most productive regions of west Texas.  Since the drought, pronghorn populations have continued to decline and in an effort to restore numbers, TPWD, in conjunction with BRI, initiated a pronghorn translocation program.  In 2011, 2013, and 2014 respectively, 200, 130, and 102 pronghorn were captured from viable populations in the Texas Panhandle, and translocated to sites within the Marfa Plateau and Marathon Basin.

Key aspects of determining the sucess and survival of these introduced

For additional information on this important project, contact THCC.

To view a thank you letter from Sul Ross University.

SCI Foundation is a nonprofit organization that funds and directs worldwide programs dedicated to wildlife conservation and outdoor education. SCI Foundation ensures that the best available science is used in wildlife policy and management, and demonstrates the constructive role that hunting and hunters play in the conservation of biodiversity around the world. The organization is First For Wildlife, investing millions of dollars into wildlife conservation and education every year.

SCI Chapters often partner with state or provincial agencies to sponsor on the ground conservation initiatives. Through these efforts, many local wildlife conservation projects are completed. SCI Foundation supports these chapter projects through our Matching Grants Program.

The following projects are a few projects the THCC supports:

The Deer Breeders Corporation (DBC), a non-profit organization dedicated to the deer and hunting industries, is currently collaborating with Texas Tech University on developing research to identify genetic resistance to Chronic Wasting Disease (CWD), a key step towards ultimately defeating the disease.

“Some organizations and researchers seem content to focus on creating new tests so the deer industry can better manage CWD, but we are pushing research in genetic resistance so we can eventually discover a means to actually stop the disease,” says DBC Executive Director Tim Condict.

Earlier this summer, the DBC first publicly announced its commitment to defeating CWD by partnering with TTU — as well as other universities, entities and individuals — to achieve that goal.

“Our collaboration with Texas Tech is the first major step in the process,” says Condict. “From landowners to hunters to wildlife enthusiasts to deer breeders, everyone can benefit more by defeating CWD than by simply trying to manage it. We invite all individuals, businesses, organizations and researchers, who want to be part of the solution, to join us in this program.”

“Defeating any disease is never easy,” he adds. “The truth is that we can do more than manage and test for the disease. If we work together and stay focused on the prize, we can defeat CWD once and for all.”

The DBC is a member-based organization founded to benefit deer breeders, ranchers, outfitters and wildlife enthusiasts. DBC is one of the most proactive associations in North America for providing unique and helpful benefits to its members, including feed rebates, an EHD vaccine program, free online auction, complimentary classified ads, scholarships, reasonable magazine advertising rates, auction sales, and much more. 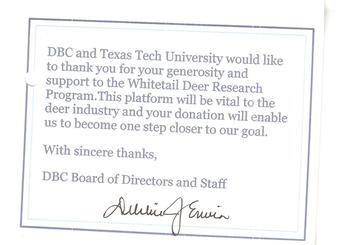 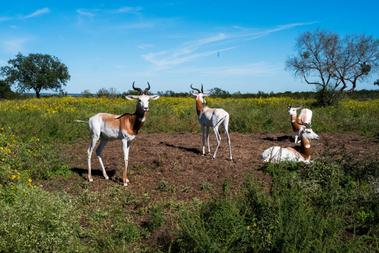 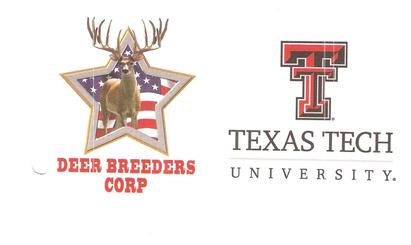 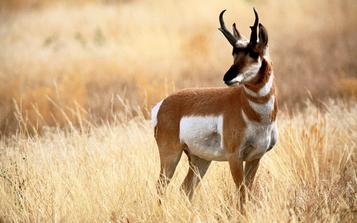