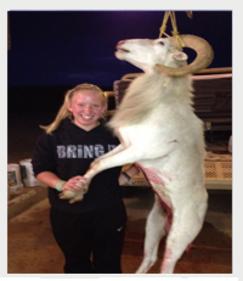 On Sunday, July 8, 2012, three young ladies from the Kerr County 4-H Club embarked on an amazing opportunity that they will remember for a lifetime and tagging along was a chaperone that also accumulated lifelong memories to share. The Texas Hill Country Chapter of Safari Club International sponsored them to participate in the Indian Head Ranch week long Apprentice Camp in Del Rio, TX. We were greeted on Sunday by our great guides and counselors that would be teaching us so many things throughout the week. Also there were other youth that would be attending the camp. The kids made friends quickly with the other youth. The counselors showed the kids where they would be staying for the week and gave them some time to unpack and get settled in. Once all campers had arrived, the fun began. The girls were given a hands-on lesson of kill zones on different game animals using a computer game called "Laser Shot Challenge." This was right up their alley; they were able to play computer games and learn to hunt ethically at the same time.